See slide show of past Legion and Auxillary Presidents at bottom of this page.
Bird Watching Capital of Manitoba - IBA
Municipality of Westlake-Gladstone
Langruth Elementary School
William Morton Collegiate Institute
United Church and Records
The United Church was built in 1910 in North Lakeland and moved to Langruth in 1923.
Lutheran Church - Heritage Site
The construction of the Lutheran Church began in 1929, undertaken by a number of paid workers and volunteer assistance from the church congregation. Congregation member Carl Lindal, a master cabinet builder, designed and constructed the platform enclosure and pulpit. The church, dedicated in the summer of 1930 by Reverend K. Olafson, was given the name Herdukried Lutheran church. Herdukried is the name of a mountain in Iceland and, in the Icelandic language, means Œwide shoulders.¹ In 1963, the name of the church was officially changed to Grace Evangelical Lutheran Church.

Like other settlement groups, church construction was always a priority among the Icelandic community, most of which was of the Lutheran faith. Church buildings were of a simple design‹a wood-frame, rectangular-shaped structure with a tower and a gable roof. Buildings were enlivened with Gothic Revival elements, such as pointed arched entrances and windows and crenellated porch sections.

On March 14, 1994, the church was designated a Municipal Heritage site. Designation Authority: The R.M. of Lakeview. Present Owner: Trustees of the Grace Evangelical Lutheran Church of Langruth.   Picture


Lakeview Initiatives Community Development Corporation
The Lakeview Initiatives is a volunteer group dedicated to the promotion of Langruth and the surrounding area. The group meets on the 4th Monday of each month at 7:30pm in the CFAN Central building. Everyone is welcome to attend. Mailing address is Box 129, Langruth, Manitoba R0H 0N0
Fire Department
Library
Legion
The Royal Canadian Legion Branch #162 received it's charter on May 4, 1945. Members and their families organize the annual Decoration Day and Remembrance Day Services which include a parade to the cenotaph, a service to remember those killed in action and laying of flowers. The Legion has a pool table, shuffle board, slot machines and occasionally holds social events with entertainment and meat draws. In 1992 the Flag Bearers were: Elvern Sorenson, Everett Schneider, Jim Clearwater, George Edgeworth, Bill Kuhn, Bert Brown, Harvey Parson. Front Row: Ileen Witt, Emil Kleemola, George Hanneson, Jim Stanley, Howard Stanley, Charlie Blair, Gordon Hall.

Ladies Auxillary (not in order) 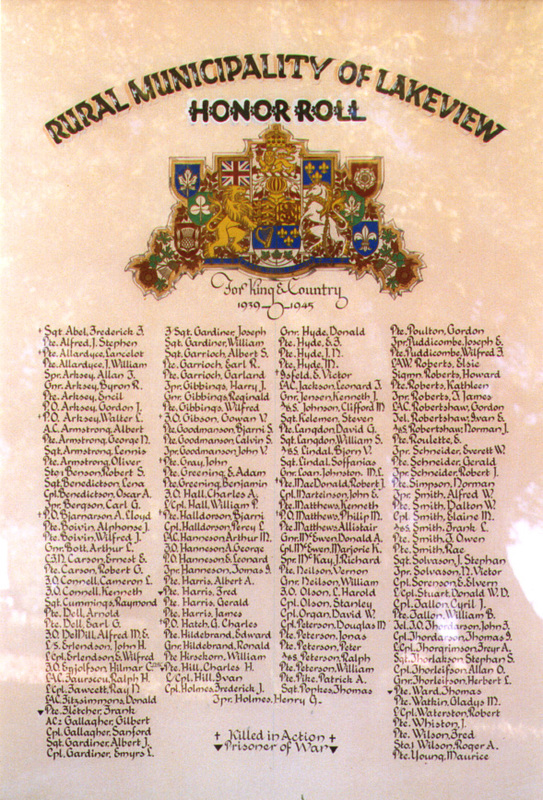